Monitoring in Kubernetes is a complex task.

The traditional monitoring framework is not sufficient to handle such a massive workload.

Zabbix since version 6.0 provides a native way of integration for monitoring Kubernetes cluster.

Why I don’t like the Zabbix’s direct way of monitoring Kubernetes cluster?

Although Zabbix-Kubernetes integration looks promising in the beginning , it is not easy to use.

The documentation is not clear, it is mostly based on the assumption that the Zabbix server is running inside the same Kubernetes cluster.

There are so much details missing in the documentation especially if you want to do the monitoring from external Zabbix server or even to do a multiple cross cluster monitoring.

And finally, most of all, the Zabbix monitoring system is not designed to monitor directly such a volatile, dynamic, multi-dimensional metrics from infrastructure like Kubernetes.

Prometheus is an opensource monitoring system which can collect massive amount of data in near real-time using it’s pull-based mechanism.

Prometheus can be easily configured for service discovery.

It is agentless and works by sending an HTTP request so-called scrape, which can find the endpoints and scrap metrics from any source.

The response from scrape request is parsed and stored in Prometheus database.

Prometheus provided powerful querying using it’s PromQL and the metrics collected can be pulled from any external system like Zabbix or Grafana via its API.

Prometheus collects the metrics from any source by scraping the HTTP endpoint which contains metrics.

It also provides a web interface to view the metrics.

The metrics are exposed via API.

Prometheus metrics can be queried by any HTTP client using it’s API Endpoints.

Why Prometheus is just not good enough?

Prometheus is good for collecting the metrics from Kubernetes cluster. But it is not enough to act as a full-stack monitoring system.

Here are some of the limitations.

The proposed approach is to use Prometheus as a backend for Zabbix.

This approach provides the flexibility of using Prometheus pull based metrics collection, scalability and PromQL queries. Also the advantage of Zabbix for alerting, anomaly detection and role based access control etc.

Architecture of the proposed approach 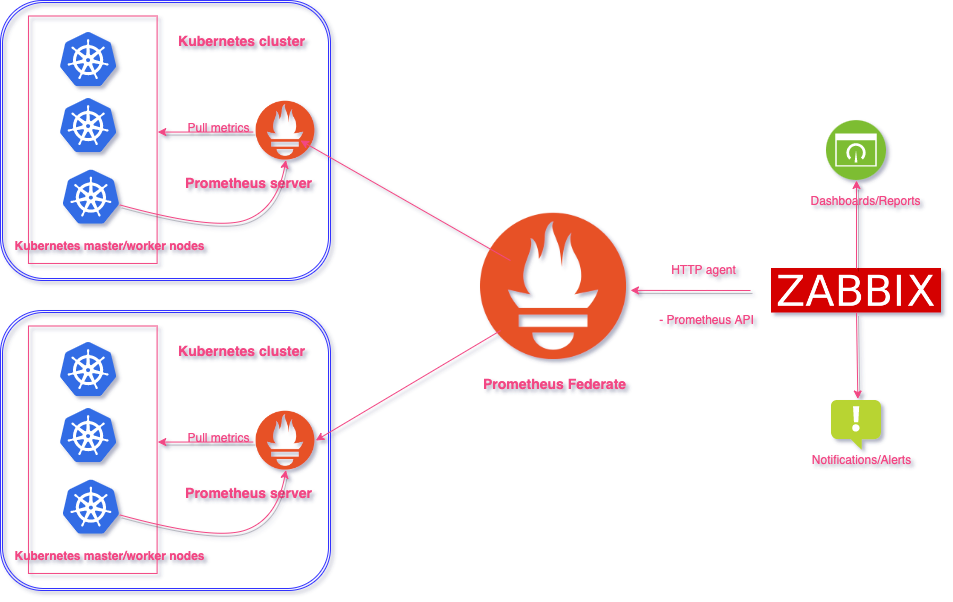